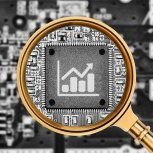 Had a chance today with what LN2 I had left. Took a good 30L in total just today.   So many runs just short of the 6 minute mark for so long, its awesome to have actually done it now.