The line between ambient water and chilled/cold 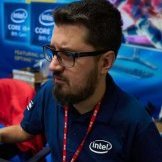