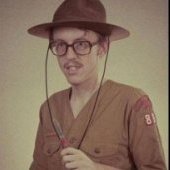 Reserved for more Stuff/Guides. --- There quite a few significant changes, however and below is a list that compares traditional expectations vs actual behavior of RKL: