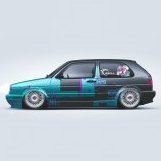 Special LS bin G.Skill memory flying on OC Formula 5200c15 1.96v all air cooled with fairly warm ambient temp. Timings are as set in profile and haven't had a chance to start tightening them up